The Hastings Rarities has been a scandal within the birding world since the 1960s, when George Bristow was alleged to have carried out one of the biggest frauds in birding history. However, has the extent of his involvement perhaps been exaggerated and misinformation accepted for all these years?

In 1962, two papers (1,2) and an editorial (3) were published in an issue of British Birds, which proposed the deletion of 542 specimen and 53 sight records of rare birds from the Hastings area of Sussex (a 20-mile radius from Hastings Pier, herein the ‘area’; between 1892 and 1930, herein the ‘era’). Among them were 16 species not otherwise been recorded in Britain at that time. These 595 records became known as the Hastings Rarities, and it was notoriously claimed that the records originated as a result of fraud by local taxidermist, George Bristow (1862–1947). Interestingly, a press conference was held soon after publication of these papers, ensuring that their findings became common knowledge. Newspapers stated that the event was ‘The biggest hoax in ornithological history; a birdwatcher’s Piltdown fraud’. Nearly 60 years on, it is still widely accepted that Bristow was a fraudster. However, Morris (4) looks more closely at the events during that time, and sheds light on the potential for misinformation and the exaggeration of Bristow’s fraud. Morris claims to “seek a more balanced judgement, particularly in relation to the taxidermist George Bristow” (4).

One of Morris’s main arguments is that the entire list of deleted records itself is exaggerated in number. Any rarity recorded with the area/era was included in the 595 records for no other reason than that it was recorded in the area/era, thus exaggerating the claim of fraudulent records. Many of the deleted records are potentially genuine. In addition, 53 records on the list are said to be “double counted” by Nicholson & Ferguson-Lees as they include both taxidermy specimens and sightings, again adding to the exaggeration.

The paper by Nelder used Chi-Square tests to show that the pattern of rarity records from the area/era differs from what would be expected by chance. His analysis compared the number of rarity records in the Hasting area during the era, to the number after the era, and to those from the rest of Sussex and Kent both during and after the era. Morris argues that Chi-Square tests require that samples compare “like for like” but that the Hastings area is not actually “like” the rest of Sussex and Kent during the era. This is because the Hastings area includes more than 60 km of coastline, where one would be more likely to find rare seabirds than further inland and the era attracted a lot of birders searching for rarities. It also included Bristow’s long-established business, with numerous contacts. These are statistically ‘confounding variables’ and it is impossible to know how much effect each had, but nowhere else in Kent or Sussex had all three of these factors operating to the same extent. 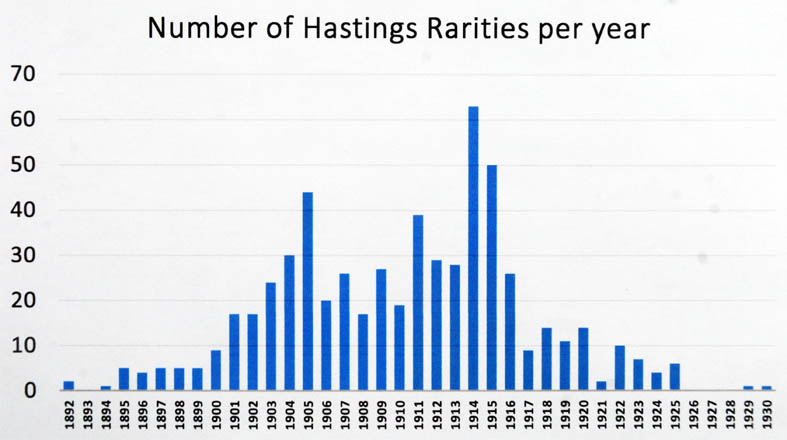 3. The feasibility of fraud and World War One

The feasibility of fraud was not considered by the original authors accusing Bristow. The records for the Hasting Rarities include species from three different continents (North America, North Africa and Eastern Europe / Central Asia). Therefore, Bristow would have needed people in each continent collecting the specimens for him and shipping them to England. In addition, in 1892 it was not possible to deep freeze specimens, so keeping the specimens fresh in transit would have presented a huge challenge. A potential source of birds was London’s Leadenhall Meat market. However, this was unlikely to supply rare seabirds, and it was a busy place where anyone suspected of committing fraud (for 30 years) could have been easily spotted. The onset of the First World War (which is when the most rarities were recorded, see Fig. 1), also poses an issue regarding fraud. The Leadenhall Meat Market saw a 97% decline in the meat trade from Europe during this time, and the closure of ports and shipping routes would have made imports of birds difficult. 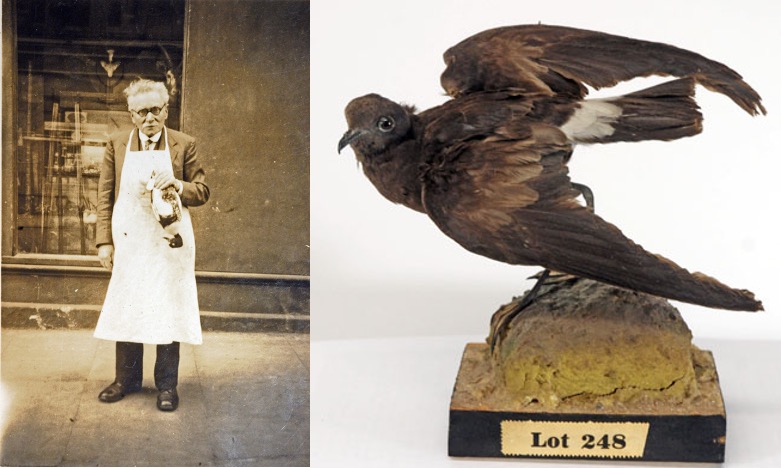 While the main motive proposed for the fraud was financial gain, no actual evidence of Bristow profiting from his activities was put forward. It seems that Bristow was not making the significant profits presumably necessary for him to continue his fraudulent activities. Additionally, the lead author of one of the original 1962 papers (Max Nicholson) was also thought to have a personal distaste for taxidermists, previously claiming taxidermy was a ‘mischievous occupation’ (Nicholson 1926).

Finally, apparently only 209 of the 542 specimens were noted as being ‘taken to Bristow’, suggesting Bristow himself only had 38% of the Hastings Rarities! Therefore, even if fraud had been committed, it was certainly not on the scale that Bristow has been accused of for many years.

While these arguments do not prove the impossibility of fraud, they do shed light on the scale of misinformation surrounding the accusations against George Bristow, and suggest that the likelihood of the records being genuine, while still potentially improbable, is not “impossible” as has been claimed. Questioning the plausibility of fraud, the effects of wartime, the potentially biased statistics and the sheer exaggeration of the deleted records allows us to better judge the truth of the Hastings Rarities and come to a fairer evaluation of George Bristow. Ornithologists treat the suspect records as ‘unproven’. Morris argues that the same should apply with regard to the accusations against Bristow.