Around 140 people attended this excellent joint meeting and were rewarded with a superb range of talks. Pamela Rasmussen set the scene by reviewing the new species and rediscoveries of Asian birds that have occurred in recent times. Since 1998, working with co-authors she has, of course, described six new Asian bird species herself. Primarily, her talk described the processes involved in looking for such species, both in the museum and in the field. The audience enjoyed the stories behind the rediscovery or discovery of several notable species, including Forest Owlet Heteroglaux blewitti, Serendib Scops Owl Otus thilohoffmanni and Flores Scops Owl O. alfredi—to mention just three. Debbie Pain then reported the latest news in the international plan to save the Spoon-billed Sandpiper Eurynorhynchus pygmeus. Survey work along the Chinese coastline has found 226 birds at three coastal sites, against a background of massive habitat loss and a significant level of trapping. Meanwhile, on the breeding grounds in Chukotka, Russia, huge efforts are underway to help the birds to achieve higher fledging success by reducing their exposure to potential predators. In parallel, there is also the UK captive-breeding programme that looks set to succeed soon. Next, Chris Gooddie gave us an insight into the birding opportunities at Bukit Barisan Selatan National Park, where 415 bird species have been reported to date. Located in the Bukit Barisan Mountains in Sumatra, the park has a total area of 3,568 km², and spans three provinces. It was the site of the rediscovery of Sumatran Ground Cuckoo Carpococcyx viridis in 1997, the first sighting in 81 years. Chris certainly put the case that this park deserves more attention from birders.

After the lunch break, Stuart Marsden outlined recent work on the success or otherwise of large frugivorous birds inside and outside protected areas in Asia. The results of this work have shown that frugivores are seriously threatened due to habitat loss and hunting. His research team has surveyed 25 species of pigeons, parrots and hornbills over nearly 500 km of line transects on Luzon in the Philippines. They noted an absence of large parrots from many sites with apparently intact habitat, and even where they are present, these species exhibited lower densities than related species in similar habitat in mainland Southeast Asia. However, those in protected areas have fared better in most cases. Robert Prŷs-Jones then outlined the amazing life of Allan Octavian Hume, often referred to as the ‘Pope’ of south Asian ornithology. Born in 1829, Hume had a varied life as a civil servant, political reformer and ornithologist. Much of his adult life was spent in British India where seemingly he soon began accumulating a personal collection of bird specimens, which was destroyed during the violent rebellion of 1857. However, Hume started again and eventually amassed a huge collection of almost 100,000 specimens collected by himself and others – at that time, the largest of its type anywhere in the world. Hume kept details of every specimen in his collection, but tragically these were stolen and sold off as waste paper by a servant in 1883. This was a huge blow to him personally, but also to the world of ornithology, as he had intended to write a definitive book on the birds of British India. Hume subsequently lost his interest in collecting and ornithology, but passed his collection to the British Museum (Natural History), now in Tring, where it retains its importance as key reference material. Finally, Per Alström shared his most recent work on a range of warblers and larks using DNA to reveal some unexpected relationships and cryptic species. He showed how DNA analysis has revolutionised phylogenetic studies. Not only have DNA sequences become easier to obtain, but more powerful computers have enabled more rigorous assessments of their relationships. His examples showed how some species have evolved strikingly different features from their close relatives, potentially obscuring their relationships, and his work has revealed a number of new species across Asia. Both this and the first talk of the day proved that there is still much to be discovered in Asian ornithology based on a combination of rigorous field work and ever-more powerful analysis.

Andy Gosler spoke on From ornithology to ethno-ornithology. “As an ornithologist, I am fascinated by birds. As an ethno-ornithologist, I am fascinated that I am fascinated by birds!” was how Andy started his thought-provoking talk, which was partly a testimony of his personal career journey from ornithology, in which he became interested at the age of ten, to ethno-ornithology – the study of human relationships with birds, in which as an experienced bird ringer he was inevitably embedded. His ornithological research over 30 years, mostly in connection with the Edward Grey Institute’s world-renowned long-term population study of Great Tits Parus major in Wytham Woods, Oxford, had been focused chiefly on the question of adaptation – first on the eco-morphology of the birds’ bills, and most recently on the adaptive function of protoporphyrin pigment spots on Great Tit eggs (a pattern that is common to the eggs of numerous small passerines). These studies had been the subjects of previous talks to the Club over the years, but in addition to their ornithological value, they had led to one realisation: that it is impossible to study ecology today without taking anthropogenic effects into account. For example, acid precipitation was probably the cause of long-term change in the pigmentation patterns of the tits’ eggshells, which suggested a 6% decline in shell thickness due to a reduced availability of calcium in Wytham soils.

From this point, Andy switched the focus of his talk to the relationship between humans and birds. He pointed out that attention to birds was a human universal that to the best of our knowledge has been reflected to some extent in every one of the 7,000 cultures (based on language groups) on Earth. Furthermore, across countries, avian and linguistic diversity appear correlated, although the causes of the correlation were likely to be complex and diverse. Despite these relationships, most conservationists hadn’t appreciated the importance of human cultural connections with birds for the promotion of bird conservation. This was a particular concern now since linguistic diversity was declining in parallel with loss of biodiversity; with the loss of languages went local knowledge of plants and animals encoded within those languages. A good example is from the UK, where general knowledge of natural history was in sharp decline (Andy presented data from his recent study of Oxford biology undergraduates showing that half couldn’t name five British birds), and that it was a truism to say that people will not work to save what they did not know. Finally he presented data from his own study of 3,290 recorded folk names (collated by etymologist Michel Desfayes) of 78 passerines, showing the strong significance that birds had had in English folk culture pre-1900. Andy is director of a new project in collaboration with BirdLife International, the Ethno-ornithology World Archive, which seeks to collect folk knowledge of birds globally, and subject to permissions from knowledge-holders, share this online: www.zoo.ox.ac.uk/egi/research-at-the-egi/ethno-ornithology-world-archive-ewa/

20 May 2014: After the AGM Guy Kirwan spoke on Cuban birds at home and abroad, in the field and museum.

Summary: This talk provided an introduction to the birds of the largest Caribbean island, Cuba, which despite boasting the most speciose avifauna in the West Indies supports fewer endemics than either Hispaniola or tiny Jamaica. Nevertheless, depending on taxonomy, at least seven avian genera occur only on Cuba, as well as the world’s smallest bird, Bee Hummingbird Mellisuga helenae, while the country might yet prove to be the last bastion of one of the planet’s most mythical birds, Ivory-billed Woodpecker Campephilus principalis. Despite >150 years of ornithological exploration, our knowledge of Cuban birds is still advancing comparatively rapidly, especially with respect to their ecology and conservation, largely via the efforts of a few dedicated researchers, both Cuban and foreign. The talk focused on the taxonomy, ecology and conservation of some of the most special of Cuba’s birds, and provided an introduction to travel in what was very briefly part of the British Empire!

Biography: Guy Kirwan has been a regular visitor to the Greater Antilles since the mid-1990s and is a co-author of a forthcoming checklist to Cuban birds. He is a freelance ornithologist and editor, notably of Bull. Brit. Orn. Cl., with strong interests in avian taxonomy and the breeding biology of birds in the New World tropics. A Research Associate at the Field Museum of Natural History in Chicago, he recently joined the BOU’s Taxonomic Subcommittee and currently works for Lynx Edicions on the HBW Alive project. 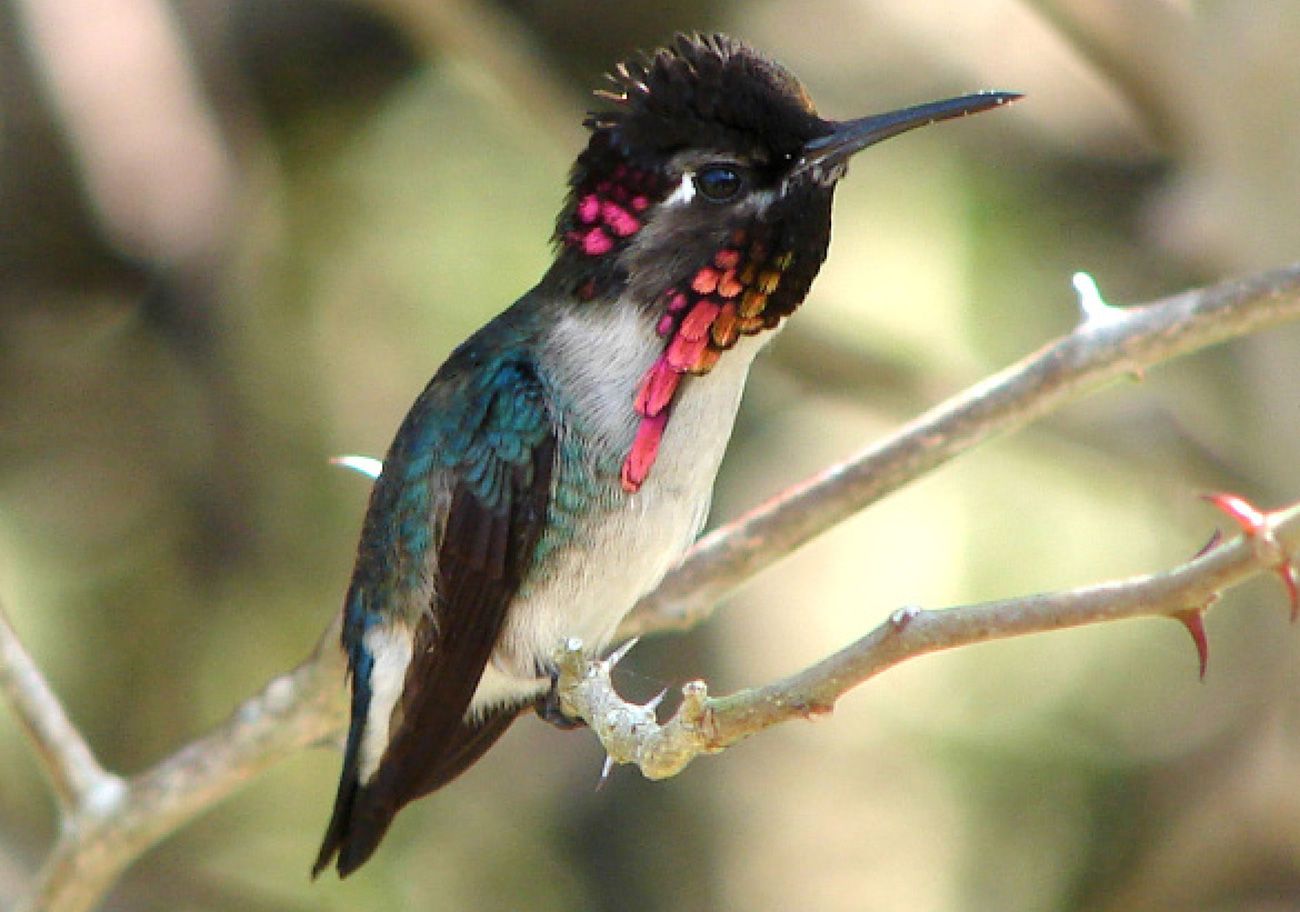 Male Bee Hummingbird Mellisuga helenae (©Arturo Kirkconnell). The world’s smallest bird and just one of the many Cuban endemics that was featured by Guy Kirwan in his talk on 20 May 2014 at the Barley Mow, 104 Horseferry Road, London.

Summary: The Socotra archipelago lies in the Arabian Sea, c.350 km south of the Yemen mainland. Ecologically heavily influenced by the dry south-west monsoon that batters the islands in May–September, it boasts high endemism in plants, reptiles, insects and birds. Whilst its avifauna is species-poor, with just 42 regular breeders, 11 are endemic, making it the richest area of avian endemism in the Middle East (along with the highlands of south-west Arabia). From 1999 to 2011, Richard was engaged in mapping the distribution and determining the populations of the breeding species and he presented some of his findings. He spoke briefly about the migrants that visit the islands and recent taxonomic studies that have added Socotra Buzzard Buteo socotraensis, Abd Al Kuri Sparrow Passer hemileucus and Socotra Golden-winged Grosbeak Rhynchostruthus socotranus to the species list. His talk  ended with some thoughts on future research and conservation.

Biography: Richard Porter has had a continuing involvement in bird research and conservation in the Middle East since 1966, when he spent the autumn studying soaring bird migration over the Bosphorus. Whilst his early exploits were largely in Turkey, since 1979 most of his visits have been to Yemen, particularly Socotra, and Iraq, where he is the bird and conservation adviser to Nature Iraq. Richard, who is author of Birds of the Middle East, advises BirdLife International on their Middle East programme.