Tuesday 22 September Dr Hazel Jackson (a post-doctoral researcher with the Durrell Institute of Conservation Ecology at the University of Kent) spoke on: Molecular phylogeography and mechanisms of invasion success in Ring-necked Parakeets across Europe.

Increasing human-mediated transport of species around the world has led to invasive species becoming one of the largest global conservation challenges of today. Studies in molecular ecology can help us to unravel how evolutionary processes are important for informing conservation and invasion biology by understanding genetic mechanisms that enable populations to grow and adapt in a changing world. Ring-necked Parakeets Psittacula krameri are one of the most widely introduced parrot species in the world, with breeding populations in more than 35 countries. Native to southern Asia and sub-Saharan Africa, they have been transported around the globe due to their popularity as pets, and these charismatic parakeets are now a staple feature of urban gardens and parks across Europe. To understand underlying evolutionary mechanisms that enable invasive Ring-necked Parakeets to be so successful, she conducted a genetic investigation on parakeets from across their native and invasive ranges.

Phylogenetic reconstructions of patterns of evolution suggest that Asian Ring-necked Parakeets diverged c.2.5 million years ago and are ancestral to those found in Africa. Invasive populations across Europe, and in the Indian Ocean, predominantly originate from Asia, with surprisingly few individuals from Africa involved. Evidence from genetic phylo-groups, trade data and drivers of population growth highlight how multiple introductions and patterns of climatic similarities between the native and invasive ranges are mechanisms for invasion success, permitting parakeets to avoid problems associated with a small founding population size, such as inbreeding or high juvenile mortality. These findings are important to inform future policy for managing invasive species, and have already been applied to conservation and invasion management by improving the ability of ecological niche models to predict areas suitable for future invasions of Ring-necked Parakeets.

Tuesday 19 May  Dr Henry McGhie (Head of Collections and Curator of Zoology at Manchester Museum) spoke on: Who do you think you are, Henry Dresser? Birds, books and business.

Henry Dresser was one of the most important British ornithologists of the 19th and early 20th centuries. 2015 marks the centenary of his death, but just who was he and what did he do? Viewed from the present perspective, with well-formed science institutions and societies, it is difficult to imagine how a band of independent-minded men banded together to shape the institutions we have today. Henry Dresser and his contemporaries embraced the Victorian ideal of self-help, and took full advantage of their opportunities to further their personal interests. Dresser was born in Yorkshire and his father worked as a merchant dealing in Baltic timber. Henry was educated to assume the family business and travelled very widely in northern Europe from the age of 14; he also spent time in New Brunswick, and in Texas during the American Civil War. Wherever he went, he furthered his bird skin and egg collection (a must-have for any serious 19th century ornithologist), using business trips as an opportunity to meet curators, naturalists and collectors overseas.

When he settled down in London, in his late twenties, Henry and his ornithologist friends collaborated closely, building their own specialist collections and mixing in scientific society. Dresser specialised in Palearctic birds and his collections helped produce the eight-volume History of the birds of Europe, begun with Richard Bowdler Sharpe of the British Museum. Henry went on to produce several other important reference books: monographs on rollers (Coracidae) and bee-eaters (Meropidae), a condensed manual of Palearctic birds, and another work on European birds’ eggs. He was a ‘mover and shaker’ in the development of early bird protection laws, and a leading light in the early Society for the Protection of Birds (now the Royal Society for the Protection of Birds), as well as in the British Ornithologists’ Union and Zoological Society of London. Henry’s collections are now mostly in the Manchester Museum. Dresser’s life will form the subject of a book, due to be published in 2017.

A patient person, at least with museum specimens, she has been researching the collections of the English explorer-naturalist John Gilbert for nearly 40 years. She opened her talk with a picture of Gilbert, a reconstruction based on the few comments that exist concerning his physical appearance – there is no known portrait of him. Despite this, Australians have named a major river, two mountains, a view and an aeroplane after Gilbert, and many species such as Gilbert’s Whistler Pachycephala inornata, Gilbert’s Potoroo (a small kangaroo) and Gilbert’s Dragon (a lizard) bear his name. Clem showed a photograph of the large audience, including clergymen of several denominations, who had made their way to outskirts of the tiny town of Taroom in central Queensland to attend the opening of “Gilbert’s Lookout” in 2004.

Some of Gilbert’s avian discoveries, such as the Gouldian Finch and Noisy Scrub-bird, are now endangered, and Clem described how individuals of the latter species have been successfully translocated to suitable locations based on habitat notes that Gilbert had made. She also described the difficulty of pin-pointing which of Gilbert’s specimens of the Noisy Scrub-bird was the first he had collected, and the one on which Gould based the new species Atrichornis clamosus. Her instincts tell her it is a specimen in the collection of the Museum of Comparative Anatomy at Harvard University, rather than the designated lectotype in the Academy of Natural Sciences of Drexel University in Philadelphia. This has important implications for the species, especially because of increasing ability to extract DNA from old museum specimens.

Clem reviewed the meticulous research which has gone into identifying the type locality of the Paradise Parrot, sadly now extinct, which Gilbert discovered on the Darling Downs of southern Queensland. The date (and thereby the exact locality) Gilbert and his friend Charles Coxen first collected this beautiful parrot, 17th May 1844, was discovered by Clem and her colleague Ian McAllan by reading Gilbert’s faded pencil diary entry from a copy on microfilm. This could be back-lit, whereas the original diary entry looks completely blank. The date, 17th May 1844, is recorded on Gilbert’s original label on an adult male cabinet skin now in National Museums Liverpool, but the designated lectotype in Philadelphia has no original label and no collecting date, and therefore cannot be proved to have any type status.

Gilbert collected in many locations in Australia, but his most important site was the tiny British naval colony of Port Essington, on the north coast of Australia. Here he collected thousands of specimens, including many birds which he turned into rough-fleshed skeletons. A Bush Stone-curlew skeleton prepared by Gilbert lay forgotten and ignored in one museum collection because the glass lid of the box had been incorrectly swapped with that of another, data-less specimen. Clem has now swapped the lids back. Gilbert collected eggs and nests; his employer, John Gould, split the egg clutches up and sold them to different collectors. Some clutches are now divided between museums in the Netherlands, California, Connecticut and Hertfordshire and can only be reunited by comparing Gilbert’s writing on the eggs, made difficult by the blobs of old glue which often obscure this.

Gilbert’s last collecting expedition was undertaken as a member of the First Leichhardt Expedition of 1844-1845, the first party of Europeans to cross Australia. On this important expedition Gilbert collected the type specimens of a few birds such as the White-browed Robin Poecilodryas supercilosus, but was too much preoccupied with herding pack bullocks and finding water to do much collecting. His sad death in Cape York Peninsula in June 1845, aged just 33, robbed England and Australia of one of the most able bird collectors, but left us with a plethora of irreplaceable specimens and field notes. Clem has still much work to do, but thanks to a two-year grant from the Leverhulme Trust has been able to work out the answers to many thorny problems, and post the current results of her Gilbertian research on National Museums Liverpool’s website, please see: 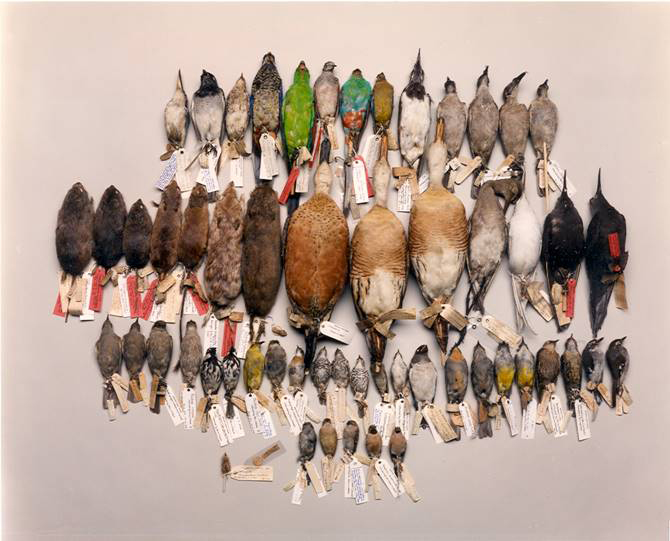 A selection of John Gilbert’s Australian specimens in the collections of National Museums Liverpool, which includes several specimens from extinct species, including the first Paradise Parrot ever collected.