Storm-petrels are the smallest of the petrels, are closely related to albatrosses, and represent more than one-third of the world’s truly oceanic seabird species. Most are nocturnal at their nesting sites, shy by nature, and breed on remote and often inaccessible islands. These features of petrels render them difficult to study and many populations are hardly documented.

The description or recognition of a new species is a very rare event. Our new study, published in the Bulletin of the British Ornithologists’ Club, describes a new species of storm-petrel, and endorses  the name New Caledonian Storm-Petrel Fregetta lineata. It is endemic to New Caledonia, a French overseas territory with a rich and unique biodiversity. The fact that the species has remained previously undescribed is remarkable. Three museum specimens remained misidentified for many years, even though the species is easily found off New Caledonia and in the Coral Sea off north western Australia. However, the precise locations of their breeding colonies are unknown. Their estimated world population is in the region of 100 to 1000 pairs.

Meticulous morphometric analysis and genetic cross-checking shows that the three museum specimens (one collected on the Marquesas Islands in 1922; another from Samoa in 1839; and a third from Queensland, Australia, 1973) are identical to each other, and identical in plumage to birds photographed at sea off New Caledonia and in the Coral Sea. The three specimens had all been misidentified and remained forgotten in museum collections. The type specimen Thalassidroma lineata (Peale, 1848) was neglected because of doubts as to where it was collected. Our study shows that Fregetta lineata is a valid species with an extant population. We discuss when and where it breeds, and call for urgent conservation action. Our study represents a very rare case, in which F. lineata is not technically a new species to science, having a pre-existing name given c.175 years ago, but it is a new species for the field guides.The first sighting of the New Caledonian Storm-Petrel was in 2008, off southern New Caledonia, one of our co-authors being among the observers. Numerous observations were made in the same area in subsequent years (with up to 24 individuals being seen on a single day in January 2020, plus regular sightings of identical-looking storm-petrels in the Coral Sea from 2010) and demanded our attention and an explanation. The New Caledonian Storm-Petrel resembles another recently described species, the New Zealand Storm-Petrel F. maoriana, first observed in 2003 at sea off North Island, New Zealand, again involving one of us in the initial sightings.

Our study includes the first report of breeding evidence for the species. A fledgling was caught, photographed and released by the inhabitants of Port Bouraké, New Caledonia. The bird was captured adjacent to Leprédour Island, a nature reserve in the Province Sud. It had down on its head and nape, indicating that it was fresh from the nest. Presumably, it had become disoriented by the street lights. The date, in September 2014, indicates winter breeding in New Caledonia and corresponds to the majority of New Caledonian observations in January-April.

Where exactly does it breed? All of the islets of the southern lagoon of New Caledonia have been visited and carefully searched, with several nights spent on most of them, and no storm-petrel has ever been seen or heard there. Alternatively, the New Caledonian Storm-Petrel could breed on islets in the Bouloupari lagoon, or inland. The Tontouta River valley, which runs through forested peaks along the coast, such as the Dent de Saint Vincent, is worth investigation since another petrel species breeds there.

The museum specimens collected from the Marquesas and Samoa almost certainly represent the non-breeding range of the New Caledonian Storm-Petrel, while sightings in the Coral Sea probably mainly represent a breeding-season feeding area.

It is now vitally important to find breeding burrows where immediate protection measures will be necessary. Based on the numbers observed at sea, both off Australia and New Caledonia, the population is probably in the order of 100 to 1000 pairs and the species  is potentially already critically endangered. The main recommendation therefore, is to find and protect their breeding sites immediately. 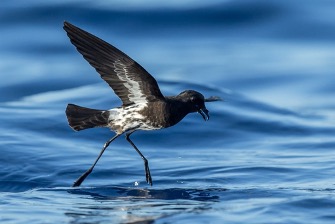 The New Caledonian Storm-Petrel Fregetta lineata, ‘running’ on the sea surface. This behaviour gave rise to the nickname ‘Jesus-bird’, an expression often used for storm petrels. This bird was photographed in January 2020, during studies of the species at sea off New Caledonia. Photo de Hadoram Shirihai (©Tubenoses Project).